The Sudden Valley Jazz 2017 series has concentrated on presenting both male and female jazz singers throughout this year. Starting with Western Washington students Sage Romey and Kirk Roa, then presenting husband and wife team Greta Metassa and Clipper Anderson, followed by blues-oriented Josephine Howell and Paul Klein, it seems ﬁtting that we end with one of the ﬁnest jazz singers in the Paciﬁc Northwest, Rebecca Kilgore. She regularly performs worldwide at jazz festivals, jazz parties, and on jazz cruises. She has been a frequent guest on National Public Radio’s ‘Fresh Air’ with Terry Gross, has appeared on ‘A Prairie Home Companion’, and with Michael Feinstein at Carnegie Hall. Becky is honored to have been inducted (in 2010) to the Oregon Music Hall of Fame and to the Jazz Society of Oregon’s Hall Of Fame, and to have been invited to perform at New York’s Mabel Mercer Cabaret Convention for three years at Town Hall and Lincoln Center. She was the guest of honor at the 2013 Roswell (New Mexico) Jazz Festival, and honored as a Jazz Legend at the San Diego Jazz Party in 2016.

In keeping with this year’s theme of honoring both male and female jazz singers, Rebecca has a wonderful singer/composer in her quartet, Los Angeles drummer Dave Tull. For thirty years, Dave Tull has been known as a world-class jazz and big band drummer. For the last ten years, he has built a reputation as a great jazz singer, songwriter and bandleader. In July 2016 Dave became the drummer for the iconic Barbra Streisand and has played three US tours, including the live recording in Miami for a soon-to-be-released Netﬂix special. For those of us who really dig Dave Frishberg, there’s a lot of Frishberg in Tull.

The Rebecca Kilgore concert happens on Nov. 11th at 3 p.m. at the Dance Barn (Gate 2) in Sudden Valley. It will be a wonderful wind-up of a memorable season. 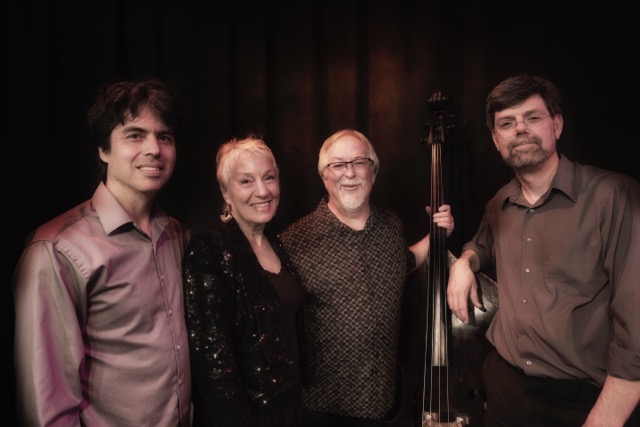